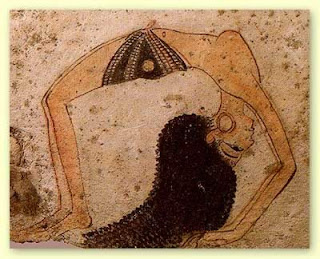 The earliest records of the religion of Egypt tell of a very philosophically conceived God without beginning or end. The sole progenitor in heaven and earth uncreated and self-begotten. “But”says Mr Lenorment , “this sublime notion, if it was retained In the esoteric doctrine, soon became obscured and disfigured by the conceptions of the priests and the ignorance of the people. The exoteric notions which prevailed over it had to do with secondary and personal deities only, and Egyptian magic occupied itself merely with the hosts of these. They were ruled over by a God-in-chief it is true but he wasone of their own sort being like Jehova, a promoted tutelary divinity. At each of the many removals of the capital city, from the lower valley of the Nile in the direction of its source – from time to time made necessary fron the shifting that way by the shifting that way to the centre of population, a new god-in-chief had to be installed since the custom of the country made the local made the local deity of the district ex-officio Lord of the Universe. Here there was no Brahman into which souls could be absorbed. Nor did the Egyptian religion, though including belief in rebirths, allow any means of escape from them by absorption in any god high or low, in fact, any mode whatever.

Yet Egypt had yoga, and one which like all others, was only attainable through rigorous self-discipline, which acting on the very nature of he practitioner, transformed him into a magician (mystic). It amounted to a junction and a junction with god.
Mr. Lenorment says, “There was indeed a formal belief in ancient Egypt, which was attested by numerous passages from the religious texts, that the knowledge of divine things elevated a man to heights of the gods, identified him with them, and ended by blending with that of the divine. The primary idea of all the magic formula which were designed to repel torments of life and the attacks of enormous animals was always assimilation to the gods. The virtue of the formula lay not in an invocation of tne divine power, but in fact of a man’s proclaiming himself as such or such a god and when he, proclaiming incantations, call ed to his aid any one of the Egyptian Pantheon – it was as one f themselves that he had a right to the assistance of his companions.
Concerning the methods of practice, Mr. Lenorment just leaves it to be inferred that it consisted in the knowledge. But in a quotation he gives from the ritual of the dead there is more than a hint that, in Egypt as elsewhere, steadfast concentration was the key to that knowledge with austerities for aids and trance for incident. It is this: “This chapter was found at Seaenou, written in blue upon a cube of blood-stone under the feet of a great god. It was found in the days of King Mysterinus the voracious by the royal son Hartatel when he was traveling to inspect the accounts of the temples. He repeated a hymn to himself after which he went into ecstasies. He took it away in the king’s chariot as soon as he saw what was written upon it. It is a great mystery. One sees and hears nothing else while reciting this pure and holy chapter. Never again approach woman, eat neither meat nor fish.”
In the celebrated reply of Jamblichus the neoplutonist to a letter written by Porphery as if to a priest of Egypt, making enquiries about the religion of that country, it is strenuously argued that magical works are performed by divine and not by human power and that to attain to that state of union with the gods by means of which their abilities may be appropriated for the benefits of men, philosophical thought is of no value but only theurgic work.
The presence of the invoked deity “is indicated by the motions of the body and of certain parts of it, by the perfect rest of the body, by harmonious order and dance and by elegant sounds or the contraries of these. Either the body likewise is seen to be elevated or increase in bulk or to be borne along sublimely in the air. An equability also of voice according to magnitude of a great variety of voice, after intervals of silence, may be observed and again sometimes the sounds have a musical intension and remission and sometimes they are strained and relaxed after a different manner.