Posted at 18:51h in Nov 2010 by The Yoga Institute 0 Comments
0 Likes
Shri Yogendraji
This rule holds true always. If you indulge in wrong behavior or negative tendencies, the results will continue to be of a pathological and depraving kind. Evil etches a groove for itself in our memory. A complete change occurs in our personality. The pure spectrum of our consciousness enters into denser areas. The poor quality of our awareness and understanding manifests variously including in diseases – physical and psychological. Here are stories in circulation in ancient asramas – the final resort for the sick and the suffering ones. 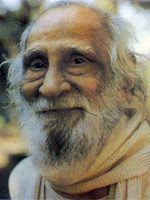 First thoughts, their impressions and their behavior, seems to be the sequence in all our behavior in life. The desire to steal leads to such a behavior also. The philanthropist thinks in a charitable way and acts so. The sick continues to remain sick just as a greedy individual remains greedy all his life. In fact when indulging thus in a certain way as a result of old tendencies, one comes to like that kind of behavior. As Emerson has said: “It is easy for a strong person to be strong and for a weak one to be weak’. In fact the man with positive feelings is so imbued with this spirit that he maintains such an outlook all his life.
It was a winter day, cold had just set in. People felt the severity of winter as much as birds and animals. A sadhu arrived in a village, lighted afire, sat and got lost in his devotion. The severity of winter did not affect him. Nearby stood a merchant who was pious at heart and gave away in charity whatever he could to saintly individuals. He had purchased recently a beautiful kashmiri shawl for the winter. On seeing the sadhu seated without protective clothes on him, the merchant ran down to his house and brought the shawl. He went up to the sadhu, quietly covered him with the shawl and stood respectfully at a distance after that. The sadhu recognized the sincere devotee in the merchant and while blessing him said; “Child, you continue to act thus always.” The merchant was very pleased and went his way.
A thief was standing at a distance from the sadhu. No sooner the merchant departed he moved towards the holy man. “The shawl is indeed very expensive and can provide me for the winter. What will this poor sadhu do with such expensive piece? In fact this piece is not his earning and moreover what has a sadhu to do with a shawl? The thief was just voicing a popular feeling that a holy man need no comforts or even necessities.
The thief assured himself thus and was sure that if he chose to steal the stuff there was no fear of any kind – law would not interfere, the holy man would not get angry, there was also no fear of a chase. He therefore decided on a trick. He went over to the sadhu, pretended to be his disciple saying, “Sir I am blessed by being in your presence. Meeting with holy men removes one’s sins, one’s pains and one’s poverty.” He then praised the quality of the shawl on the holy man and desired to see the texture of the beautiful piece. He drew away the shawl from the sadhu to himself and after a while announced, “Forget it that you will ever get this shawl again” and just walked away. He heard the holy man saying to him, “Child you continue to act thus always.”
This last sentence of the sadhu intrigued the thief. He could not fathom this. The holy man said similarly to the philanthropist as he just told him. Why does this man bless people like this – asked the thief to himself. The curiosity led to a pause, a desire for understanding. This became a new tendency in him and it led him back to the holy man. He fell at the feet of the sadhu, asked for his pardon and mentioned his very deep-seated urge to understand what the sadhu said and did. “You bless the merchant that he continues to act always in the same way as he acted with you, and you blessed me also that I continue to act the way I did.” The holy man explained: “Child good people maintain their goodness always. The wicked continue according to their nature. Be sure the evil doer will enjoy a life of evil deeds all along. The merchant is a man of noble feelings, love and and so I blessed him to continue thus. You saw the shawl and had the perverted desire to steal the shawl. So I blessed you that you are creating evil tendencies and as a result would act thus all your life. “
(In Paramahamsa ni Prasadi.)
Published in the November 2010 edition of Yoga & Total Health Magazine
www.theyogainstitute.org