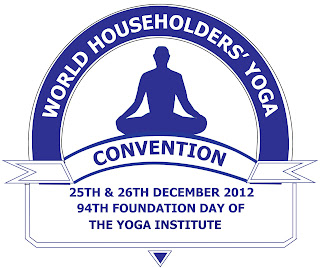 ‘Householder Yoga’ is not a brand of yoga, unlike many popular brands that exist today in the ‘yoga market.’ It is simply a term to describe a simplified form of yoga for the common man and woman. Many people believe that the spiritual aspect of yoga is for Sanyasis (Ascetics) who have left their homes to attain enlightenment. However, there is a place, in the middle of the commercial capital of India – Mumbai, where yoga and its spiritual aspects are taught to householders.
The seed of this was sown 94 years ago, when Shri Yogendraji founded The Yoga Institute in 1918 after receiving practical firsthand training from the last apostle of Yoga – Paramhamsa Madhavadasji.
Even when he went to learn from his Guru, Yogendraji made it clear that he intended to live a householder’s life when he said, “I am anxious to learn from you and am prepared for everything, but I can neither lose interest in the society nor break ties with the world – the whole kaleidoscope of life around me. I am deeply interested in spirituality not to seek an escape from life but to live it more fully.”
At the time, many ill-informed people had extreme prejudice towards yoga. Scientific minds also considered its study as non-essential and unsuitable for householders and its practice by a woman was inconceivable.
In 1918, Yogendraji worked very hard to systematically revive Hatha Yoga by propagating it not just as a philosophy but as a positive science of potent educational, therapeutic, moral, intellectual and spiritual values to humanity. He simplified Hatha Yoga techniques and brought about a great transformation in the outlook towards yoga. Staying true to his word, he married and lived a householder’s life. His wife Smt. Sitadevi joined him in spreading the knowledge of yoga for the first time among women. Their son, Dr. Jayadeva Yogendra and his wife Smt. Hansaji are now continuing their legacy at The Yoga Institute, Santacruz.
Today, a popular belief has arisen that yoga means perfection in Asanaswhere one can perform different stunts and attain some miraculous gains. So, one may ask, “Why simplify Hatha Yoga techniques? Can we not do the same postures as the Hatha Yogis?”
Hansaji explains, “There are many varieties of yoga mentioned in scriptures. But Maharshi Patanjali used the essence of yoga from them all and gave a systematic path and made guidelines for us. He has defined an Asana as a posture where one can remain steady and comfortable and a person should put in enough effort to sustain it for a long time.
However, at the Institute, we found that there were many varieties of Hatha Yoga Asanas which were harmful if done by a common man. For example, a Hatha Yogi may stand on one leg, with his hands up for many hours or days. If a normal man tried this, he would lose his physical ability because his body is deficient and his nerves are restless. The hands would go numb, the leg would get swollen. Hatha Yogis live a secluded life and have no other responsibilities. They can afford to experiment with their bodies, whereas a householder has many responsibilities, anxieties and worries. So the path of a Hatha Yogi and that of a householder has to be different.
A householder does not require the extreme stretch of Hatha Yoga practices. Backward bending followed by forward bending till one can even touch the toes is enough for maintaining health, instead of doing a complete Cakrasana. 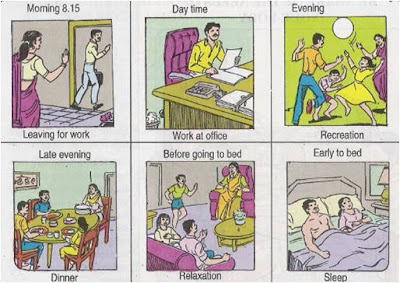 A householder has the chance to learn from the varied experiences he has in life, making his progress faster – he can be happier, healthier, do right Karma, can be accepting, productive and also good for the society. Patanjali emphasizes on control of the mind which is done on the intellectual as well as emotional level. The Bhavas (Attitude Training) is a unique concept taught at the Institute that help in gaining this control.
The main message we want to propagate is that the householder should inculcate yoga in day to day life, similar to how villagers squat when milking a cow and bend forward when cutting crops.
In fact, looking back into the past, traditional yoga was originally for the householder. Krsna went to Sandipani Ashram, Ram went to Vashistha Ashram. Students used to go and live in the Guru’s house where the Guru was a householder with wife and children. They learnt to apply the teachings to their everyday life.”
It is this very spiritual aspect of yoga, that hardly anyone is aware about inspite of all the hype about yoga, that The Yoga Institute has been silently working to propagate. On 25thand 26th December 2012, we celebrate 94 years of this kind of selfless service towards humanity.
As Dr. Jayadeva says, “This is a small institute. No central government, no state government, no municipal grants, no large donations from anywhere. It is carrying on for 94 years on its own strength. We don’t have Sadhusand Sanyasis. Here there are no restrictions. Yoga can be practiced by all but there should be a very good amount of self control and discipline. Try and understand concepts involved and use them in a simple way. Patanjali has made it very clear; those who are sincerely interested to follow yoga – to stop the Citta, should take up yoga.”
All are welcome to explore the world of classical yoga at the World Householders’ Yoga Convention – 25th, 26th December 2012, at The Yoga Institute Santacruz.