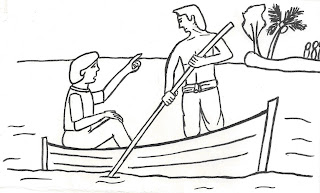 Bura Jo Dekhan Main Chala, Bura Na Milya Koi, Jo dekhu dil khojke, Mosay bura na koi! (I went out in search for the crooked, I met not a single one. When I searched myself, I found none worse than me. )

As this Doha by Kabir suggests, we should not have a negative angle. But, by family background, by education, by culture, we have many prejudices. We do not see things as they are but rather as we like to see things.

We love our habits, our opinions, our beliefs, our ideals. We, as a result of such a strong way of thinking, also suffer. A child that is taught by his family to see only wickedness suffers a lot and is critical with all. He is apprehensive, tense; there is less of joy and selflessness. We should, at least, understand that our thoughts are not entirely our own. They are acquired from other sources. Many opinions are emotional and conditioned.

Yoga is a de-conditioning of wrong opinions. It makes us free from strong emotions, attachments, beliefs which are the cause of lot of our problems. We can learn a lot by putting ourselves in another person’s position.

In Ahimsa and Satya this is suggested. Try to realize how the other individual feels and suffers. Try and understand if your hurt is a grievous; done out of cruel intention, done by yourself or allowed to be done by others and you just instigated it; whether the hurt is through thoughts, words or actions. To understand another person and to appreciate.

Published in the October 2011 edition of Yoga & Total Health magazine.