Posted at 22:11h in Satsang by The Yoga Institute 0 Comments
0 Likes

The topic for the Satsang on Sunday, 21st October, 2012 was Bharat ke Sant (Hindi) i.e. Saints of India.

Following is the transcript of the speech made by Dr. Jayadeva Yogendra and Smt. Hansaji Yogendra on the topic. 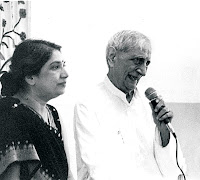