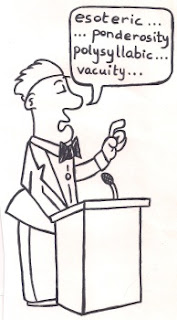 A famous lecturer was asked the formula of success in public speaking. “Well”, he said, “In promulgating your esoteric cogitations and articulating superficial, sentimental and psychological observations, beware of platitudinous ponderosity. Let your extemporaneous decantation and unpremeditated expatiations have intelligibility and veracious veracity without rodomontade and thrasonical bombast. Sedulously avoid all polysyllabic profundity, pusillanimous vacuity, pestiferous profanity and similar transgressions.

“Or to put it a bit differently,” he concluded smiling “talk simply, naturally, and above all, don’t use big words.”

Isn’t it true in life – the best things are the simplest. What does it need to communicate your innermost feelings – a simple nod, a smile, a genuine handshake, a pat on the back or I would go to the extent of saying simply, good feelings in the heart.

This is what the Yogins classified as the highest mode of communication.

Published in the October 2011 edition of Yoga & Total Health Magazine.