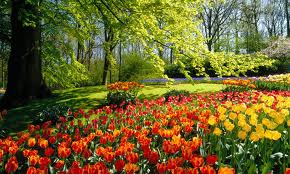 In a remote corner of one of Mumbai’s shore-line stands beautiful Jogger’s Park. Mr. Shanker, after a half an hour stroll sat on a high rise bench to enjoy the evening breeze and sink in the sunset’s golden glow. At some distance was a young lady in a track-suit, doing standing Asanas on the lawn which was surrounded by a five foot hedge, offering complete privacy. At the opposite side was a middle-aged woman practicing sitting postures.
Yoga Asanas in a public garden? Of course the entry was restricted by an entrance fee and it was manned by uniformed well-behaved guards. There were many enclosures which women, children, senior citizens and families visited for rest and recreation. The rhyme and rhythm of the Yogic Asanas in such a serene atmosphere was fascinating.
In the open-space lawns were some men engrossed in their own endeavours. Not to be undone, the senior citizens on the benches were practicing Pranayamas.
How did all this happen? Mr. Shanker realized that in 1991 when the park started there were only some joggers and walkers who were regular visitors. Slowly it dawned upon him that in not a very far away suburb, Santacruz, was situated The Yoga Institute, known worldwide for the excellent service rendered to humanity for 92 years.
The Yoga Institute was running special classes for those who had health problems. There were 7 months and 1 year Teacher Training Courses. In addition, on invitation from the Ministry of Human Resources Development, in 1994 a one month Teacher Training Course was introduced to teach Maharashtra Government Teachers to impart yoga knowledge to school children to keep them healthy and fit. To spread knowledge, private participants were also allowed to undertake this course.
Due to some changes in the working of different ministers in government the one month Teacher Training Course was discontinued. Having established this very useful course, it has continued for private students. Over the years the number has nearly expanded to one hundred, including both English and Hindi sections.
It is a great feeling that the new course, which started with one main teacher, has progressed so much that men, women, young and old have embraced the yoga fold and are bold enough to practice in the park.
Let the flowers bloom!!
Published in the June 2011 edition of Yoga & Total Health Magazine.